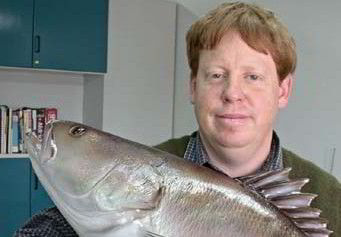 ALGAE WEEK BROUGHT TO YOU BY REED MARICULTURE: Is algae aquaculture’s secret weapon for the aquaculture industry?

In the fourth of a series of sponsored articles, we hear some case studies of Reed's products in practice.

Part of what keeps Reed Mariculture (RMI) motivated to keep innovating, said the company’s phycologist, research scientist and process engineer Eric Henry, is the positive feedback it receives from its customers across the aquaculture board — shellfish growers, shrimp farmers and finfish producers.

Henry told IntraFish Aquaculture that he was at a shellfish conference recently when farmers he had never met came to shake his hand and they said  “Thank you! You have changed the way I run my hatchery.”

RMI may have even helped save a marine fish species from near-extinction with its feed, according to Conal True, head of the fish culture biotech unit at the University of Baja California in Mexico.

True rears totoaba, a giant, endangered sciaenid from the Sea of Cortes, a fish that formerly was part of one of the most important fisheries in the region.

“For the last 20 years we have been developing procedures and protocols for the larval rearing of totoaba,” True said. “Thanks to Reed Mariculture’s algae product and their emphasis on partnership and collaboration, we could focus on larval rearing protocol development and not so much on algae culture. This has been a huge asset. This took us from low production levels on to a feasible commercial production. Totoaba is now back on track.”

So much so, that True was recently awarded a grant to build a new totoaba hatchery and continue its development.

For Australian Prawn Farms Hatchery Manager Tony Charles, using RMI’s algae concentrate product has “increased survival considerably.” RMI claims increases yields up to two-fold, as well as improving health and reducing disease. But Charles tested it out for himself, to find out whether or not the concentrates improved survival and if it made financial sense to use them.

Charles, who is also the research and development chair for the Australian Prawn Farmers Association, added that “considering the algae concentrate on average would cost around $15,000-20,000 per run (depending on amounts used), and the increase in value of PL’s produced when using it has been shown to be $196,000-$424,000, then it is safe to say that the cost of the algae concentrate is recovered many times over.”

He called the products “a major advancement in hatchery feeding protocol” and added that he was surprised by the magnitude of the effect the algae concentrate had on survival. “I expected an increase but these results blew me away,” he said.

Ian Jefferds, owner and general manager of Washington state-based Penn Cove Shellfish, also used words such as “amazed” when speaking to IntraFish Aquaculture about the difference using Reed’s Shellfish Diet made to his company.

Penn Cove used to get its mussel feed from a Washington state hatchery, but the hatchery informed Jefferds that its own oyster production got so busy they couldn’t do it anymore. Jefferds knew he had to move quickly to find a replacement.

“One of the most important things you can have for shellfish larvae is a good diet,” he said. Penn Cove itself simply didn’t have the space to raise its own algae, so in the fall of 2014, the company began using RMI’s Shellfish Diet®.

“We had some success at first and then not as much,” Jefferds said, so the team got on the phone with Tim Reed and his staff, “and we came up with a more regimented feeding plan based on desired growth rates and we talked about the makeup of the diet and how that worked with the size of the larvae we were feeding, and what type of feed rates we should be using to reach our growth plan goals.”

“They’re really smart people, they’ve got experience all over the world,” Jefferds said. “We knew they’d probably be able to help us out and I shouldn’t be amazed by how much they actually have helped us.”

ALGAE WEEK BROUGHT TO YOU BY REED MARICULTURE: Is algae aquaculture’s secret weapon for the aquaculture industry?

SPONSORED CONTENT Part of what keeps Reed Mariculture (RMI) motivated to keep innovating, said the company’s phycologist, research scientist and process engineer Eric Henry, is the positive feedback it receives from its customers across the aquaculture board — shellfish growers, shrimp farmers and ...

The new five-year growth strategy is to double sales and workforce.
Aquaculture

The farms in question must now wait 12 months and be fully audited again to regain certification.
Salmon

Norway's seafood industry has dramatically reduced farmed salmon expectations, and land-based is part of the downgrade

A long-held vision for salmon production by 2050 is receiving pushback from the Norwegian Seafood Association.