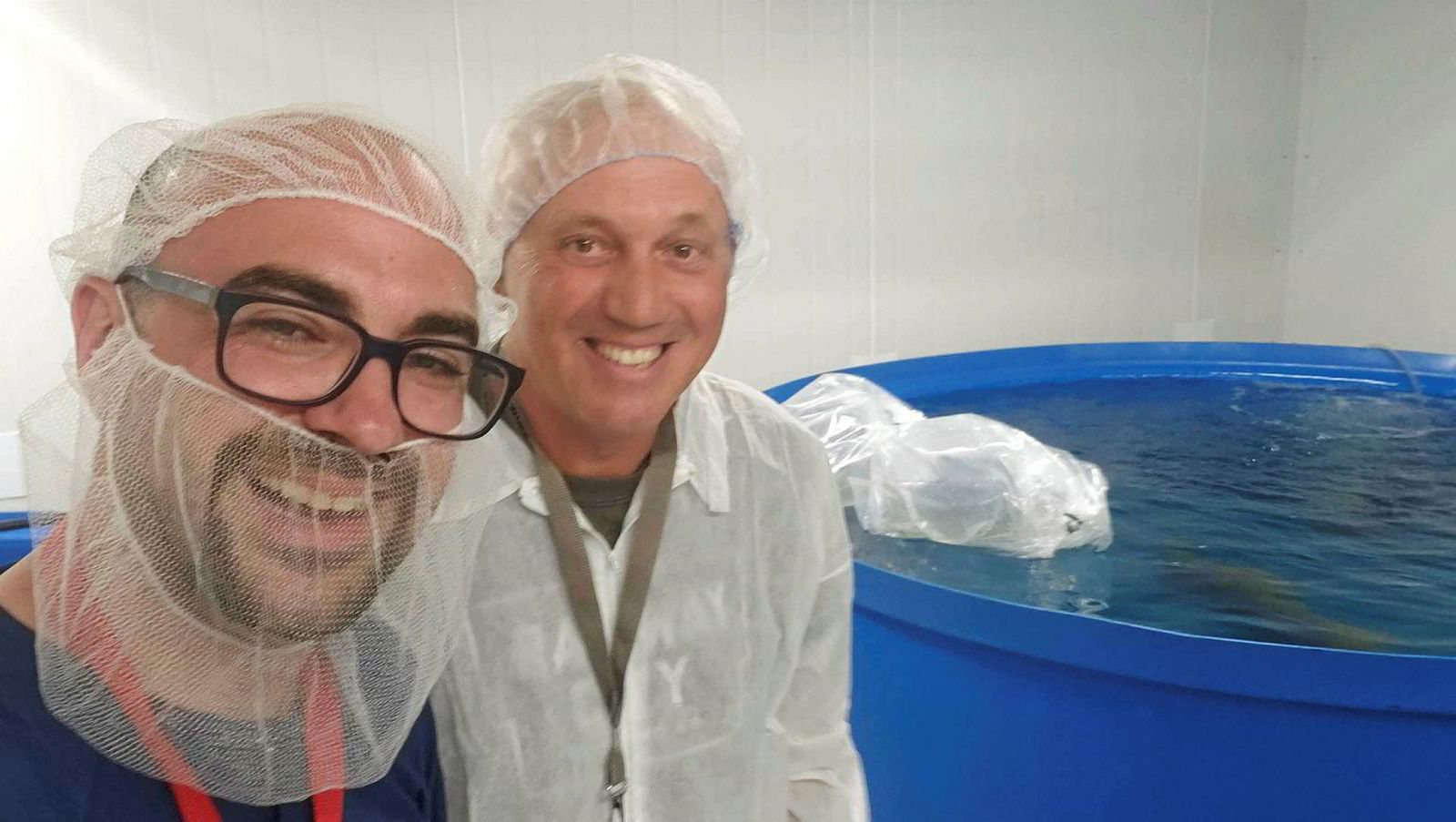 ‘I've been smoking weed for 18 years, but only eating lettuce for five': Can one man's cannabis habit change the future of sustainable aquaculture?

'I took my experience at that point, and turned my attention to creating a vertical farming and aquaponics format for cannabis.'

Canadian start-up Stewart Farms is taking the concept of aquaponics farming to a new level, by using tilapia to cultivate a different kind of leafy greens - cannabis, “the most valuable fruiting crop in the world."

Ultimately the company’s aim is to “change the landscape of sustainable farming in medicine, food crops, and fish,” Tanner Stewart, co-founder and CEO of Stewart Farms, told IntraFish.

At its core it is an agriculture technology company focused on the three pillars of indoor, vertical, and automated farming, “married with state-of-the-art commercial scale land-based aquaculture,” he said.

The company is also a pioneer in cannabis genetics which it considers a “new frontier” and which, comparable with fish genetics, “is exploding and still fairly new."

Since getting its Health Canada Cannabis License on April 13 this year, Stewart Farms has built up its science and cultivation team, launched a line of consumer packaged goods (CPG) products to market, created new strategic partnerships, and begun cultivating the next wave of cannabis genetics.

It has also brought a new species of commercial fish into the New Brunswick economic landscape – black Nile tilapia.

“We are dedicated to advancing aquaponics as a whole genre globally,” Stewart said.

'The Jedi of tilapia genetics'

The company operates out of a 100,000 square foot facility in New Brunswick, but for the early stages is only using 10 percent of this space.

It moved the first plants into the facility on April 20, 2020 – a symbolic date of sorts -- with the first generation of fingerlings arriving a few months earlier.

Stewart Farms is sourcing its black Nile tilapia from Gary Chapman and the company Americulture based in New Mexico.

“With help from Gary Chapman, who is basically the Jedi of tilapia genetics, we are farming pedigree tilapia,” said Stewart. “The broodstock originated in Lake Nasser in Egypt 27 years ago and is now on the eighth generation.”

When harvested, the tilapia from the cannabis farm will go into live Asian markets, specifically those in Boston and New York, Stewart said.

Phase one of the project will involve just 1,000 fish or 1 metric ton. As of phase two next year, this number will be more like 17 metric tons “and this will be enough to penetrate the Boston and New York markets”.

The fish will undergo a 10-month growth cycle, and will be organically certified and branded when they hit the market.

Skretting supplied the first batch but the company sources from other companies too. “We just look for the best formulated organic feeds,” said Stewart.

Tilapia is an omnivore but it leans closer to a diet which is more vegetarian based, according to Stewart. “They prefer 60 percent veggie fish feed with a 40 percent protein profile,” said Stewart.

While the best feeds currently available include fishmeal, Stewart said he does not “want to be on that train either” in the longterm.

“Replacing fishmeal is where we want feed to end up, but for us to have no fishmeal in our feed will be down to economic viability," he said. "We can’t pay five times more for feed.”

When the fish are harvested, the aim is to do at least one delivery a week into the live Asian markets, either directly or through a broker, said Stewart.

“It is the smallest part of the revenue pie if you compare a pound of fish sales versus cannabis sales, but the fish are crucial to the whole process”.

In fact, the fish will supply approximately 70 percent of the nutrients in this living system.

“Although there will be very few sales on a per pound basis, the fish are the fertiliser factory, providing on-site, live, real time fertiliser.”

Plenty of room for growth

The main products the company sells are based on “health and wellness” and include things such as bath bombs, soaps, teas, aromatherapy roll-ons, cannabis oil, and creams, and it is about to start selling its products right across the country.

The company will also sell into the recreational smoking market through specified local retailers.

"Since it was made legal in Canada, recreational use has far overtaken medicinal use, although you can argue cannabis is always medicinal in nature," said Stewart.

Capital raising on the cards

Now the company is hitting revenues, it is about to do a Series B capital raise, looking for CAD 10 million (€6.4 million/$7.6 million).

“This should be the last investment round, and from there we can organically grow,” said Stewart.

Tanner Stewart is a self-taught entrepreneur who, in his own words, “basically grew up in the woods in New Brunswick.”

He started out in the construction industry but was later introduced to a couple of agriculture technology start-ups, one of which was aquaponics based.

“Over the years I never stopped learning about sustainability, so when it came to aquaponics, the marriage of land-based aquaculture and plant farming, I immediately got it. That was it for me, I realized that sustainable agriculture, and living ecosystems is where I was supposed to be.”

Stewart invested in aquaponics technology and put his focus on advancing sustainable agriculture.

In January 2018 Stewart was completely focused on lettuce and leafy greens while cannabis legalization was rolling out but he saw a hole in the industry in regards to sustainability.

“I said to myself ‘I've been smoking weed for 18 years, but only eating lettuce for 5’ so I took my experience at that point, and turned my attention to creating a vertical farming and aquaponics format which became Stewart Farms," said Stewart.

“I felt I could have a larger impact in cannabis, as I understand it more. Also, there is very little room to innovate in lettuce genetics or tomato genetics, for example."

But Stewart is also keen to demonstrate the company’s important sustainable undertones.

Stewart Farms is focused on being as environmentally efficient as possible and Stewart claims aquaponics is 95 percent more efficient with water, than traditional systems. In addition, the company is also focused on eliminating the use of plastics and other waste streams.

“Today and evermore in the future, there will be large scale cities in need of more secure food supplies– this is something advanced aquaponics is meant to address.”

Looking for a more in-depth look at the global land-based salmon sector? An upcoming IntraFish Business Intelligence report offers a detailed analysis into this exploding sector. Get more information or pre-order your report today at Intelligence@IntraFish.com.

‘I've been smoking weed for 18 years, but only eating lettuce for five': Can one man's cannabis habit change the future of sustainable aquaculture?

Canadian start-up Stewart Farms is taking the concept of aquaponics farming to a new level, by using tilapia to cultivate a different kind of leafy greens - cannabis, “the most valuable fruiting crop in the world." Ultimately the company’s aim is to “change the landscape of sustainable farming in ...

Prices are even dipping below production costs for some farmers.
Trade

Ecuajjli found itself on a growing list of foodstuffs impounded by Chinese officials amid the coronavirus pandemic.
Finance

After successfully disposing of all its ‘non-core assets’, the company is in a significantly stronger financial position and is betting on making a profit in 2021.